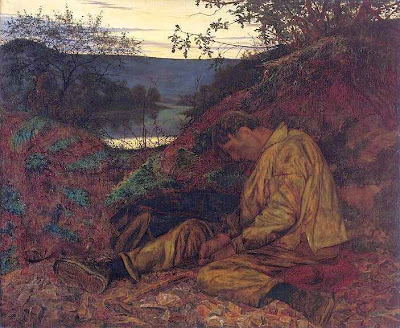 [The Stonebreaker] 1858
amazingly rich colours. The same subject was treated by the French Realist Gustave Courbet in 1849 and no doubt influenced Wallis who had done part of his training at the Ecole des Beaux-Arts in Paris.
http://en.wikipedia.org/wiki/The_Stonebreaker 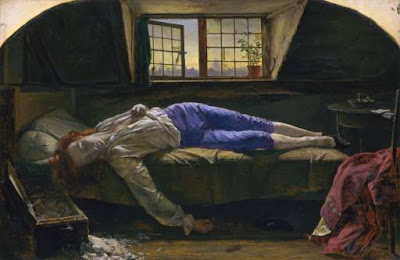 [Death of Chatterton] 1856
This picture created a sensation when it was first exhibited at the Royal Academy in 1856. Thomas Chatterton was a poet whose 'gothic' writings, melancholy life and youthful suicide fascinated artists and writers of the nineteenth century. At an early age, he wrote fake medieval histories and poems, which he copied onto old parchment and passed off as manuscripts from the Middle Ages. The fraud was later discovered. In London he struggled to earn a living writing tales and songs for popular publications. Penniless, he took his own life by swallowing arsenic at the age of seventeen.
.
1830 - 1916.
Born in London his father's name and occupation are unknown. When in 1845 his mother, Mary Anne Thomas, married Andrew Wallis, a prosperous London architect, Henry took his stepfather's surname. His artistic training was thorough and influential. He was admitted as a probationer to the RA and enrolled in the Painting School in March 1848. He also studied in Paris at Gleyre's atelier and at the Academie de Beaux Arts, sometime between 1849 and 1853.
http://www.tate.org.uk/servlet/ArtistWorks?cgroupid=999999961&artistid=578&page=1&sole=y&collab=y&attr=y&sort=default&tabview=bio
Posted by Hermes at 6:00 AM