Born in London but of Welsh blood, he studied at the school of design and then the Royal Academy Schools in 1847 where he won a silver medal for drawing from the antique.

His 'Ophelia', displayed at the Royal Academy contains a Pre-Raphaelite naturalism comparable to Millais's oil of the same subject also displayed there (indeed, according to Hunt, Millais actually climbed a ladder to examine Hughes's picture, hung high up). Hughes modelled for Millais in 'The Proscribed Royalist' (1853).

Hughes exploited the popularity of romantic subjects and painted many pictures of lovers meeting including 'April Love' (1855) (bought by William Morris) and 'The Long Engagement'.

He was sharing a studio with Munro when Rossetti invited him to take part in the 1857 Oxford Union Mural scheme. He painted 'The Death of Arthur'. Following on from this came one of his most ambitious paintings, 'Sir Galahad' (1870). From 1855, he illustrated the works of Christina Rossetti, Tennyson and Allingham. 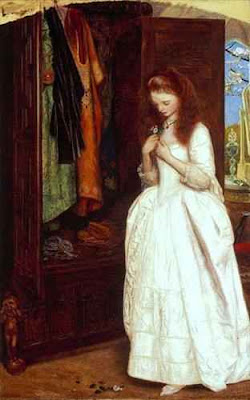 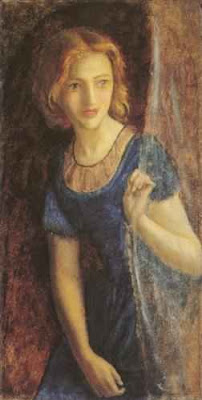 The subject is taken from Tennyson's poem, Mariana:

"She drew the casement-curtain by,
And glanced athwart the glooming flats.
She only said, 'The night is dreary,
He cometh not,' she said;
She said, 'I am aweary, aweary,
I would that I were dead!'".
.
http://www.artmagick.com/pictures/artist.aspx?artist=arthur-hughes
Posted by Hermes at 6:00 AM