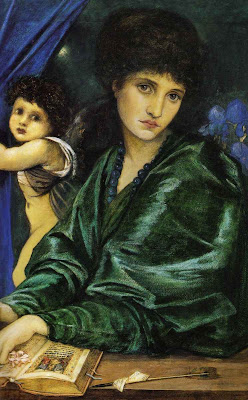 1870
Gouache
This very personal portrait shows Maria with Cupid and his arrow, the message attached to which reads, 'Mary Aetat XXVI August 7th 1870 EBJ pinxit'. She holds a medieval manuscript which contains a minature painting of his Chant d'Amour, emphasizing the ambuiguity of the pleasure and pain of his relationship with the sitter.
http://www.xs4all.nl/~androom/biography/p012261.htm
http://www.1st-art-gallery.com/Sir-Edward-Coley-Burne-Jones/Portrait-Of-Maria-Zambaco-1870.html
Maria Zambaco was the cousin of Constantine Ionides, one of the artists most important patrons. They negan an affair in 1867 which turned out to be stormy and led to his attempted suicide in the Regent's Canal. Later they ran off together but BJ was taken ill at Dover and he returned to Georgiana, though the affair continued for a few more years, Maria having to accept she would always be the Mistress and not the Wife.
Melding the Personal and the Mythological in Burne-Jones's Venus Epithalamia
http://www.victorianweb.org/painting/bj/wc/moller7.html
Posted by Hermes at 6:00 AM