A Circle of Sisters book 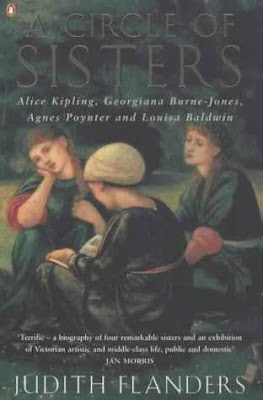 A Circle of Sisters: Alice Kipling, Georgiana Burne-Jones, Agnes Poynter and Louisa Baldwin
by Judith Flanders
Penguin; New edition edition (2002)
The four Macdonald sisters were the children of a poor Methodist minister, lacked a consistent education and yet, between them, grew up to be the wives of a famous painter (Edward Burne-Jones) and the President of the Royal Academy (Edward Poynter), and the mothers of a renowned writer (Rudyard Kipling) and a prime minister (Stanley Baldwin). At a time of some social mobility, they rose into the highest circles of national life in Victorian England. In her first book, the journalist Judith Flanders, has placed the sisters within their family and domestic context, arguing that women's actual lives have been sidelined in 'male biographies'. She shows how these young women, middle-class by the skin of their teeth, married within their social circle and, given the restricted roles for women in the Victorian era, used what power they had to bolster their husbands and children while struggling, with greater or lesser success, to channel their own talents and beliefs. Judith Flanders describes the whole social network created by the sisters, their husbands, children and grandchildren. Male relatives and friends mainly come out badly, particularly Ruskin, Byrne-Jones and Kipling with their psychological and sexual foibles, but some of the women, Janey Morris, for example, are also not spared criticism. The emphasis on women's lives enables the author to introduce social and domestic details which would be omitted from a 'male biography', such as gender roles, birth and death customs, the running of a household, shopping and childcare, as well as social and historical events which impacted on families, such as the Boer War. She skilfully interweaves all these complex strands to produce a gripping and moving narrative which includes generous quotations from letters and family papers. This is a well-written, involving and rewarding book. (Kirkus UK) - Amazon
Posted by Hermes at 6:00 AM