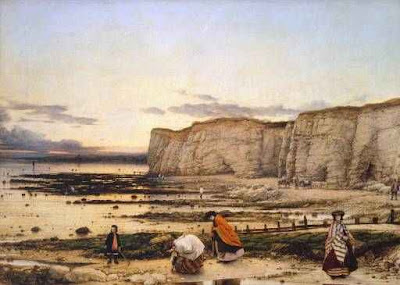 [Pegwell Bay, Kent - a Recollection of October 5th 1858]
oil on canvas
.
The result of a trip Dyce made in the autumn of 1858 to the popular holiday resort of Pegwell Bay near Ramsgate, on the east coast of Kent. It shows various members of his family gathering fossils. The artist’s interest in geology is shown by his careful recording of the flint-encrusted strata and eroded faces of the chalk cliffs. The barely visible trail of Donati’s comet in the sky places the human activities in far broader dimensions of time and space. Dyce was also very interested in Astronomy and this painting could be interpreted as a question about man's place in the universe at a time of great scientific change. The location is significant as both the supposed site of Christianity first coming to Britain and as a famous location for fossil hunting.
Painted in the open air following Ruskin's precepts.
Posted by Hermes at 6:00 AM