Henry Le Jeune - A Young Lady Sketching in a Landscape 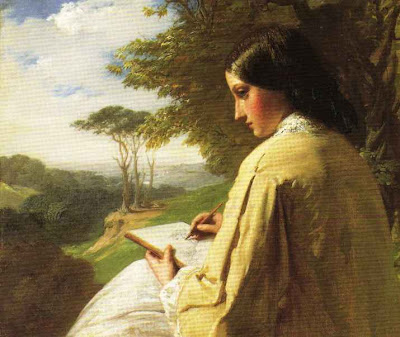 Oil on canvas
painted late 1850's
private collection
.
Henry Le Jeune [1819 - 1914] was heavily influenced by Ruskin's book The Elements of Drawing (as were many others before and since) which traced Ruskin's progress as an artist and draughtsman. Le Jeune was himself a drawing master who had worked in this role at the Royal Academy since 1845 (he became its curator in 1848), and was elected an Associate in 1862.

Though his first love seems to have been historical subjects (including biblical themes) this picture seems to be based on Ruskin's dictms on drawing style, especially to do with trees as a useful subject.
Posted by Hermes at 6:00 AM

Beautiful painting, it gave the sensation of peace and calm.