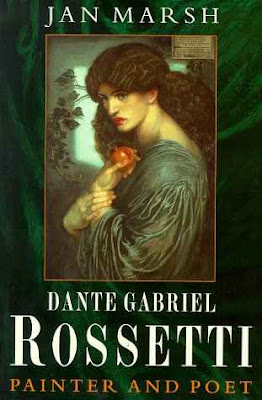 Dante Gabriel Rossetti: A Biography
by Jan Marsh
Weidenfeld & Nicolson (1999)
.
Jan Marsh is the author of the standard biography of Christina Rossetti, the marvellous Christina Rossetti: A Literary Biography. Her new biography of the brother is bigger, meatier and if anything an even more extraordinary achievement. Partly this is because Rossetti's life is so full of incident: his marriage to the beautiful, frail Lizzie Siddal, and his grief and self-blame at her death; his affair with William Morris's wife Jane; his own nervous breakdown which came on him suddenly (Marsh begins one section with the striking sentence: "The next day, Gabriel was deranged"). Partly it is that the Pre-Raphaelite movement, of which he was so central a figure, remains inherently fascinating today. Marsh concedes that although Rossetti's extraordinary poems "now languish largely unread", his paintings, with their "highly coloured iconic images" are still seen as masterpieces.
Marsh is able to balance painting and poetry, the two strands of Rossetti's life, with consummate skill, providing excellent readings of both and demonstrating their inter-relations. Her account of the life is detailed and, cumulatively, simply stunning-- in large part because she steers clear of the more lurid possibilities. As Marsh points out, "it has been so common to paint Rossetti as a lusty philanderer ... generally bedding all available models, that his celibacy requires more explanation." Startling to see Rossetti described as a "celibate", but Marsh is excellent on the repressed, paradoxical attitude towards sex that emerges from Rossetti's famously sensual art. Overall her restraint pays dividends, because Rossetti emerges at the end of the book in a new light--no longer a sordid Pre- Raphaelite Brotherhood caricature but a deeply human if flawed and contradictory character. This book is a triumph. --Adam Roberts - Amazon
Posted by Hermes at 6:00 AM