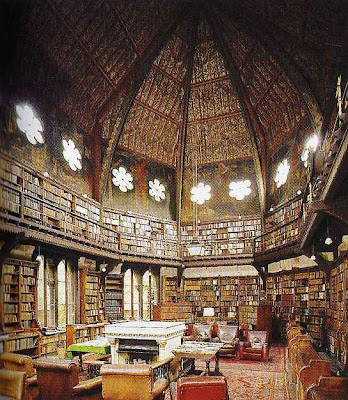 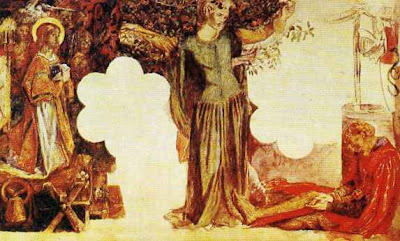 Rossetti persuaded his friend the Dublin architect Benjamin Woodward to let a group of artists decorate the walls above the gallery that encircles the debating hall of the Oxford Union that was being worked on at the time. Burne-Jones, William Morris, Pollen and Rossetti, assisted by Spencer Stanhope, Val Prinsep and Arthur Hughes painted the murals in the Summer of 1857. The atmosphere was relaxed and jovial. In technical terms it was failure and little survives today but it was a high point in developing their ideas, particularly as regards Medievalism. The paint flaked before it was even completed. It was during this period that Rossetti discovered Algernon Charles Swinurne who was a student at Balliol and became part of the group.
Posted by Hermes at 5:45 AM