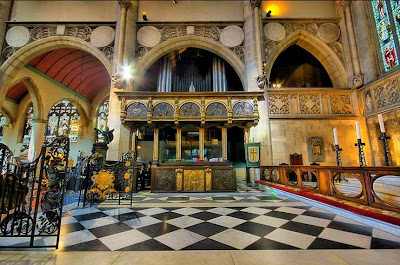 The former Poet Laureate Sir John Betjeman famously referred to Holy Trinity Church as the ‘Cathedral of the Arts & Crafts Movement’, containing as it does treasures by leading figures of the Movement.

Holy Trinity was built on a grand scale. The internal fittings were the work of leading sculptors and designers of the day, including F. W. Pomeroy, H. H. Armstead, Onslow Ford and Hamo Thorneycroft. In 1891 Sedding died (his memorial can be seen on the north wall in the Lady Chapel) and Henry Wilson took charge of the project to complete the interior decoration of the building to the original design. In part, he failed, for some of the glass was never installed, nor was the important addition of a frieze beneath the high windows even attempted. Some of the internal sculpture/carving is still incomplete. In the 1920s the interior was whitened by F. C. Eden, lightening the character and feel of the building considerably.

The church houses an important collection of stained glass, including an enormous east window by Burne-Jones/Morris; and other windows by William Blake Richmond (including some highly decadent imagery), Powells (the Memorial Chapel) and by Christopher Whall (the incomplete clerestory sequence and two striking windows on the south side of the nave). The large west window, which William Morris and Edward Burne-Jones had apparently hoped to complete before moving onto the east window, was never done and the plain glass in it was eventually destroyed by enemy action, although all the other windows survived or were repaired. The interesting project to glaze the west window remains to be realized at some time in the future.

The church was badly damaged by incendiary bombs in World War II but was restored more or less to its previous appearance by the early 1960s. In an incredibly odd move, there was then a concerted attempt by the church authorities to close and demolish the building, replacing it with something smaller but this was thwarted by a campaign led by John Betjeman and the Victorian Society.

Despite having glorious church buildings and art, the modern day Church of England is sometimes just plain bizarre. The fact that it once wanted to tear down this beautiful church is one example of that. Others include installing miniature golf courses in cathedrals in summer months so that people would "have something fun to do", and not caring that the tombs of several former archbishops are now in a church building that was turned into a museum of gardening, with a window put into the floor to make the tombs visible. Don't even get me started on the awful vestments that can be seen in some C.o.E. services today. Thank goodness for non-church related societies that work to preserve what the church would cast aside. The 19th century witnessed an incredible burst of beauty and reclamation of ancient forms and usages in English churches, all relegated to the sidelines by those in power who think that having a cross over the door of a Christian church "makes it unwelcoming".