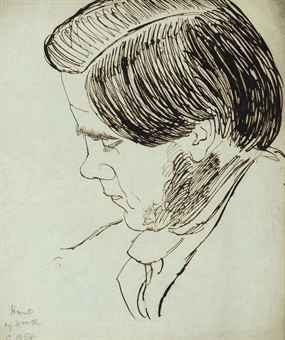 Although William Michael Rossetti had no ambitions to become a professional artist, he drew from time to time and was a member of the Pre-Raphaelite Brotherhood. For further details of his career as a draughtsman and other examples of his portrait drawings, see Angela Thirlwell, William and Lucy: The Other Rossettis, Yale, 2003, pp. 105-121.
If this sketch of his fellow Pre-Raphaelite Brother William Holman Hunt (1827-1910) was indeed made circa '1854', as the inscription states, then it must pre-date the sitter's departure for the East on 13 January of that year since he did not return to England until two years later. It is even conceivable that the drawing was made in connection with Hunt's impending absence, rather like the portraits that the PRBs made of each other on 12 April 1853 in order to send them to Thomas Woolner, the Brother who had gone off to look for gold in Australia. William Michael Rossetti was present on that occasion and sketched many of his fellow PRBs, including Hunt (see Thirlwell, p. 109, fig. 56).
http://www.christies.com/lotfinder/william-michael-rossetti-portrait-of-william-holman/5396344/lot/lot_details.aspx?from=salesummary&intObjectID=5396344&sid=e107da45-4c75-42f8-9c76-d62ad90fe2bd
Posted by Hermes at 6:00 AM