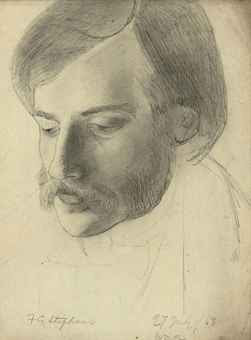 Another rare example of William Michael Rossetti as a draughtsman, and his sitter is again a member of the Pre-Raphaelite Brotherhood. F.G. Stephens (1828-1907) studied at the Royal Academy Schools and struggled to become an artist in the early 1850s, but technical difficulties and lack of encouragement caused him to abandon painting for writing and journalism. Above all he is known for the articles he wrote as art critic on the Athenaeum, a post he held for forty years (1861-1901).

Stephens was much portrayed by his fellow PRBs. Holman Hunt painted him in 1846-7 (Tate Britain), and Millais drew him as part of the series of PRB portraits that were executed for Thomas Woolner in April 1853 (National Portrait Gallery). He was also the model for the figure of Ferdinand in Millais' painting Ferdinand lured by Ariel of 1849-50 (private collection). For another sketch of him by William Michael Rossetti, see Angela Thirlwell, op. cit., p. 113, fig. 62.
http://www.christies.com/lotfinder/william-michael-rossetti-portrait-of-frederick-george/5396345/lot/lot_details.aspx?from=salesummary&pos=9&intObjectID=5396345&sid=e107da45-4c75-42f8-9c76-d62ad90fe2bd&page=1
Posted by Hermes at 6:00 AM