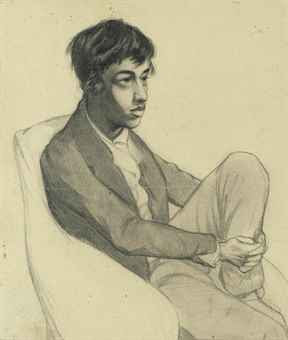 inscribed by William Michael Rossetti 'See Inscription on Frame - Peppino/was the son of the Maenza who/housed Dante G. Rossetti in/Boulogne. This Portrait was always/regarded in The Family as little better/than a caricature, yet it is not totally/unlike' (on a label attached to the backboard)
pencil, on paper
8¾ x 7½ in. (22.2 x 19 cm.)

eppino Maenza was the only son of Giuseppe Maenza, a teacher of Italian and painting who lived in Boulogne. For health reasons Rossetti visited the family in the autumn of 1843 and the winter of 1844, forming a close friendship with Peppino, who was a few years his senior. It was Peppino who encouraged his interest in French illustrators like Garvarni and Tony Johannot, who so profoundly influenced his early style.

The drawing shows Rossetti at the age of fifteen. It was made in November 1843 and 'begged' by the sitter for his mother when he returned to Boulogne the following winter. William Michael Rossetti described it at length in an article on portraits of his brother published in the Magazine of Art in 1889 and again in his biography of the artist that followed in 1895. 'It is drawn', he wrote, 'in a dark "blocky" manner ... Rossetti here looks gaunt and uncouth, a hobbledehoy with no girth of chest or shoulder, with blubber lips and almost a quadroon type face; not stupid, but so wanting in finesse as to approach the stolid ... The family always considered it a caricature'. In 2002 the editors of Rossetti's correspondence wrote that the drawing had 'never been reproduced' and seemed to have 'disappeared'.

After showing much early promise, Peppino fizzled out as an artist, took himself off to Australia and disappeared. Rossetti was trying to raise money for his benefit in 1860.
http://www.christies.com/lotfinder/filippo-maenza-portrait-of-dante-gabriel/5396349/lot/lot_details.aspx?from=salesummary&pos=3&intObjectID=5396349&sid=e107da45-4c75-42f8-9c76-d62ad90fe2bd&page=2
Posted by Hermes at 6:00 AM