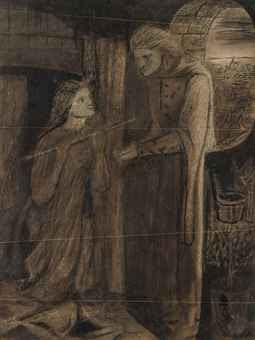 'Clerk Saunders' is a well-known Border ballad that appears in many early collections, including Matthew ('Monk') Lewis's Tales of Wonder (1800) and Sir Walter Scott's Minstrelsy of the Scottish Border (1802-3). The first part describes how the Clerk seduces Maid Margaret and is stabbed to death by her brothers when they find them sleeping. In the second part, which seems to be the subject of Siddal's design, the action moves into the sphere of the supernatural. The Clerk returns after death to claim a token of love and Maid Margaret follows him in a vain attempt to share his grave as she has his bed.

Scott described the ballad as 'uncommonly wild and beautiful, and apparently very ancient', and it fascinated the Pre-Raphaelite circle. Burne-Jones illustrated it in a watercolour of 1861 (Tate Britain), and his wife, Georgiana, included it in the repertoire of early songs she would sing to her own piano accompaniment. The traditional tune was supplied by Peter Paul Marshall, the least prominent partner in the firm of Morris, Marshall, Faulkner & Co., Fine Art Workmen, established that year.

Siddal's design was conceived in response to a commission that she and Rossetti received in 1854 to illustrate a collection of ballads that their friend William Allingham was editing for Routledge. The scheme in this form eventually fell through, but not before both artists had executed a number of designs.

'Clerk Saunders' was the first subject to be undertaken by Siddal, and she clearly identified closely with the theme. Several preliminary studies are recorded, including the present example and lot 21, while a finished watercolour of 1857 is generally considered her masterpiece (Fitzwilliam Museum, Cambridge; illustrated in the catalogue of the 1991 Siddal Exhibition at Sheffield, pl. 3). The watercolour was bought by Rossetti's American friend Charles Eliot Norton, but when Siddal died so tragically in 1862, Rossetti asked for it back, exchanging it for a drawing of his own. When he moved to 16 Cheyne Walk, Chelsea, in October that year, he hung the entire drawing-room with designs by his late wife.

Lots 19 and 20 may also have been among these drawings, while the present study could be the one to which Charles Fairfax Murray was referring in a note still on the back of the Fitzwilliam watercolour: 'A finished sketch mostly done in carmine remains in the possession of Wm. Rossetti' (the note is transcribed in full in the catalogue of the 1991 exhibition, p. 64). The colour as it stands today is more brown than carmine, but it might have faded.
http://www.christies.com/lotfinder/elizabeth-siddal-clerk-saunders/5396353/lot/lot_details.aspx?from=salesummary&pos=5&intObjectID=5396353&sid=e107da45-4c75-42f8-9c76-d62ad90fe2bd&page=2
Posted by Hermes at 1:00 PM