John Ruskin - Study of the head of 'Venus de Medici' (recto); and A subsidiary study (verso) 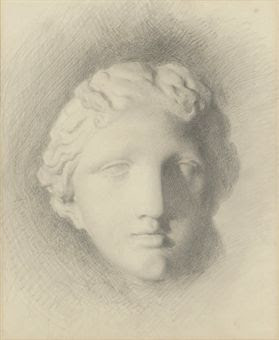 Ruskin went down from Oxford and for the sake of his health travelled to the Continent with his parents from 25 September 1840 until 29 June 1841. He visited Florence and the Uffizi and sketched the statues there, noting how refreshing it was to see the originals and that the Venus de'Medici was 'one of the purest and most elevated incarnations of woman conceivable'.