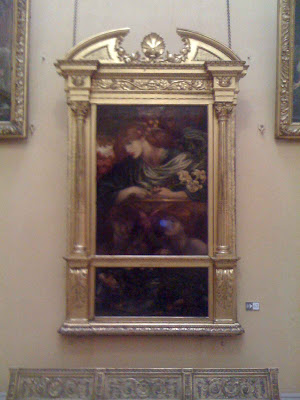 The poem its based on:
http://www.victorianweb.org/authors/dgr/9.html

This painting illustrates a poem written by Rossetti in about 1850. It tells the story of a damsel (a young woman or maiden) who died young and went to heaven. There she pined for her earthbound lover, waiting for him to die so they could be together again.

She is shown as she is described in the poem’s first stanza, leaning on the gold bar of heaven: ‘She had three lilies in her hand, and the stars in her hair were seven.’

The model was Alexa Wilding, a dress maker of striking looks and an ambition to have a stage career, but she looks a lot like Jane - or perhaps all Rossetti's models look a lot like Jane!

The painting originally belonged to Frederick Leyland and it was hung in the living room of his house in London next to 'Proserpine' (1877, Tate Britain) and among extravagant gilt furniture. The voluptuous frame may well have been particularly designed to match the overall style of Leyland's drawing room. Lord Lever, who in the latter part of his life had learnt a lot more about art and become a keen collector of Pre-Raphaelite artists, bought the painting in 1922.
Posted by Hermes at 6:00 AM

Extraordinary frame, isn't it? I assume Lord Lever bought the painting in 1922 and left it in the frame it was in. No problem. All that voluptuousness, gilt and extravagance would have looked good in Lady Lever Gallery.

Not my personal taste but it seems to have fitted in with Leyland's drawing room. I do think seeing a picture does often add to its understanding.