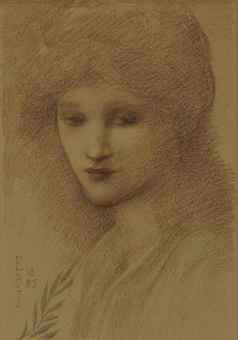 Laura Lyttelton (1862-1886) was the fifth daughter and eighth surviving child of Sir Charles Tennant, a rich and successful industrialist who became Liberal M.P. for Glasgow in 1879 and was made a baronet in 1885. She and her younger sister Margot, who was to marry Herbert Asquith, the future Prime Minister, in 1894, were considered great ornaments of society, shining particularly in the social set known as the Souls that coalesced in the mid-1880s. If Margot was known for her vivacity and formidable strength of character, Laura charmed with her grace and wit. 'Laura's charm became a legend', Jane Abdy and Charlotte Gere have written, quoting a relation who said of her: 'She is up one's sleeve and round one's neck and inside one's heart almost before one has even looked at her' (The Souls, 1984, p. 141).

In 1885 Laura married Alfred Lyttelton, the younger son of the 4th Baron Lyttelton, who was to make his name at the Bar and in politics. It seemed a fairytale marriage, but the following Easter Laura died after giving birth to a son, leaving her circle grief-stricken at their loss.

Burne-Jones, who met Laura through their mutual friend Frances Horner, was among her most devoted admirers. He called her 'The Siren', and in this drawing, made the year she married, was clearly attempting to suggest her fascination. According to his widow, the face of the mermaid in his picture The Depths of the Sea (private collection), exhibited at the Royal Academy in 1886, also 'had some likeness to her strange charm of expression'. He was devasted when she died, and impulsively wrote the words 'In Memoriam L.L. Easter 1886' on his picture The Morning of the Resurrection (Tate Britain) before exhibiting it at the Grosvenor Gallery that summer. But his real memorial to her took the form of a gesso relief showing a peacock, symbol of the Resurrection, standing on a laurel-tree which grows out of an empty tomb. Commissioned by Frances Horner, it was exhibited at the Grosvenor in 1887 and exists in both plain and coloured versions.
http://www.christies.com/lotfinder/sir-edward-coley-burne-jones-bt-ara-rws/5396363/lot/lot_details.aspx?pos=4&intObjectID=5396363&sid=&page=3
Posted by Hermes at 6:00 AM