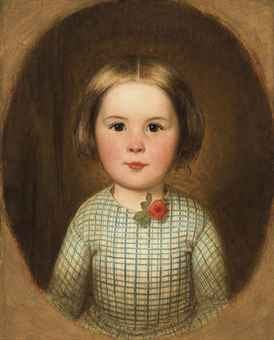 Although the format differs, our picture being an oval, this seems to be the 'circular' portrait of Elizabeth Clara Bromley (1843-1875) that Mary Bennett lists in her recent catalogue raisonné, describing the sitter as shown 'full face with blond hair, wearing a white checked dress with roses (sic) at the neck'. If this is correct, then the subject was the fourth and youngest child of Brown's in-laws, Augustus and Helen Bromley. During their infancy she and Brown's elder daughter, Lucy, her exact contemporary, were close companions. In 1866 Elizabeth married Samuel Cooper, a Eurasian government official, and went out to India, but the marriage was a disaster. Cooper proved a great disappointment, Elizabeth miscarried, and during a return visit to London in 1875 she died of apoplexy when shopping in St Paul's Churchyard (for further details, see Angela Thirlwell, William and Lucy: The Other Rossettis, Yale, 2003, pp. 60-62.).

According to Madox Brown's account book, the portrait was painted in 1846, when Elizabeth Clara was three, but she looks a little older than this and it may be nearer to 1849, the date given when the picture appeared in Brown's one-man exhibition in Piccadilly in 1865. In any event, the meticulous handling reflects his study of Holbein at Basle when he was travelling to Rome for the sake of his first wife's health in 1845 and his contact with the Nazarenes during his stay there in 1845-6.
Brown had a great ability to convey the innocence and vulnerability of children, and the portrait has several close parallels in this respect. Particularly comparable are his likenessess of Millie Smith, the daughter of his landlord at Southend (Bennett, no. B103) and of his own daughter Lucy (Bennett, no. B51). Like our picture, both date from the later 1840s and show the sitter full-face.
http://www.christies.com/lotfinder/ford-madox-brown-portrait-of-elizabeth-clara/5396358/lot/lot_details.aspx?pos=10&intObjectID=5396358&sid=&page=2
Posted by Hermes at 1:00 PM