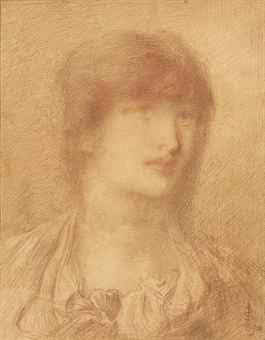 Simeon Solomon was a friend and associate of Dante Gabriel Rossetti and Edward Burne-Jones, who is said to have described him as 'the greatest artist of us all: we are all schoolboys compared with you'. Solomon enjoyed early success but his career was effectively destroyed in 1873 when his homosexuality became public knowledge.

This work is one of the many drawings of heads which Solomon made during the latter years of his career. His frequent choice of coloured chalks for works at this point was probably influenced by its affordability in comparison with oil paint or watercolour, and the limitations imposed on him by the lack of a studio space in which to work. However, its misty softness also made it an apt medium in which to capture his ethereal, visionary images.
http://www.christies.com/lotfinder/simeon-solomon-head-of-a-young-girl/5396365/lot/lot_details.aspx?pos=6&intObjectID=5396365&sid=&page=3
Posted by Hermes at 6:00 AM