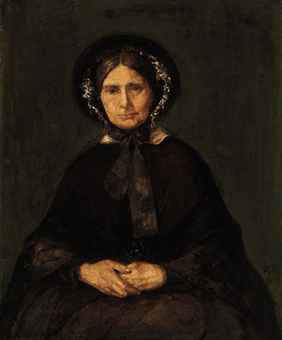 Charlotte Polidori was one of Rossetti's three aunts on his mother's side, and the one who played the most significant part in his life. It was she who arranged for the sale of his first important picture, The Girlhood of Mary Virgin (Tate Britain), to her employer, the Dowager Marchioness of Bath, and she remained his loyal supporter and confidante until his death. She attended his funeral at Birchington-on-Sea on 14 April 1882, and died herself in 1890.

The portrait was in progress by 30 September 1853 and was completed, apart from the hands, by 8 November. Rossetti considered the head 'quite as finished as anything I have painted', and his brother William Michael thought 'the likeness ... extremely good'.

Rossetti had already made a pencil study of his aunt in July 1853 (Birmingham Art Gallery; Surtees, no. 408), again showing the sitter wearing a bonnet but facing three-quarters to left. Perhaps the drawing was made when he was trying to decide on a pose for this painted portrait.
http://www.christies.com/lotfinder/dante-gabriel-rossetti-portrait-of-charlotte-polidori/5396355/lot/lot_details.aspx?pos=7&intObjectID=5396355&sid=&page=2
Posted by Hermes at 6:00 AM