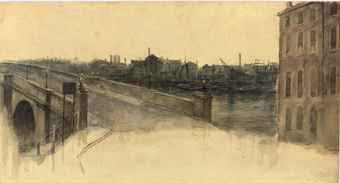 The present watercolour is a study for Rossetti's painting Found (Bancroft Collection, Wilmington, Delaware; Surtees, no. 64, pl. 65), commissioned in 1853, worked on periodically over many years, but still incomplete when the artist died in 1882. Rossetti's only attempt at a 'modern moral' subject, the picture shows a young farmer encountering a prostitute with whom he has formally been involved, now an outcast living on the London streets.

The watercolour is almost certainly the one mentioned by G.P. Boyce in his diary on 26 November 1869: 'He (Rossetti) showed me an excellent drawing that Dunn had been making for him from a window overlooking London Bridge at dawn'. Dunn was Henry Treffry Dunn, Rossetti's assistant, and it is no doubt significant that Rossetti recommenced work on the picture that year, when the commission was taken over by his patron William Graham. Indeed, by 24 December 1869 Rossetti was reporting to Frederic Sheilds that he had 'made considerable way towards the bridge background'.

Dunn's authorship of the drawing is confirmed by comparison with other examples of his work in watercolour, but the topography is open to question. Rossetti intended to locate his subject at the north end of Blackfriars Bridge, not far from the lodgings he occupied at 14 Chatham Place from 1852 to 1862; and both Virginia Surtees and Stephen Wildman, (in the catalogue of the Waking Dreams exhibition) have suggested that Boyce was mistaken in identifying the drawing as a view of London Bridge. However, Alastair Grieve has pointed out that Blackfriars Bridge as Rossetti had known it was pulled down and rebuilt in the 1860s, and he may 'have felt that the more old-fashioned London Bridge fitted better with his original conception than the new Blackfriars Bridge'.

Dunn is usually credited with having worked on the background of Found after Rossetti's death, so he may have made further use of the drawing at this date.
http://www.christies.com/lotfinder/henry-treffry-dunn-study-for-the-background/5396362/lot/lot_details.aspx?pos=3&intObjectID=5396362&sid=&page=3
Posted by Hermes at 1:00 PM