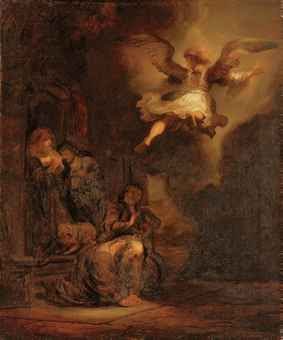 An inscription on the back of the picture in the hand of William Michael Rossetti appears to identify it as a copy after Rembrandt's painting The Sacrifice of Manoah; and Mary Bennett, in her recent catalogue raisonné of Madox Brown's work, accepts this, observing that the original picture is in the Gemäldegalerie at Dresden. But this is clearly wrong; the Dresden picture bears no relation to the copy apart from the fact that a flying angel forms part of the composition.

The true subject of the copy is another work by Rembrandt, The Angel departing from the Family of Tobias (1637) in the Louvre. William Michael dates the copy 'toward 1844', and it must have been painted when Brown was living in Paris between 1840 and 1845. Indeed his grandson and biographer, F. M. Hueffer, specifically states that during this period he 'set to work diligently to copy the Rembrandts at the Louvre' (Ford Madox Brown: A Record of his Life and Work, London, 1896, p. 29).

Brown had recently spent six years training with academic artists in Belgium, and this experience, followed by his studies in Paris (as well as Rembrandt, he was looking at the Spanish masters, Delacroix and Delaroche), caused him to develop a lush romantic style characterised by dramatic gestures and rich chiaroscuro. The most important expression of this idiom was The Execution of Mary Queen of Scots, a monumental historical work which he began in Antwerp in 1840 and completed in Paris the following year. Though now lost, it is known from an old photograph, an engraving and an oil sketch (Whitworth Art Gallery, Manchester).
http://www.christies.com/lotfinder/ford-madox-brown-after-rembrandt-the/5396356/lot/lot_details.aspx?pos=8&intObjectID=5396356&sid=&page=2
Posted by Hermes at 6:00 AM