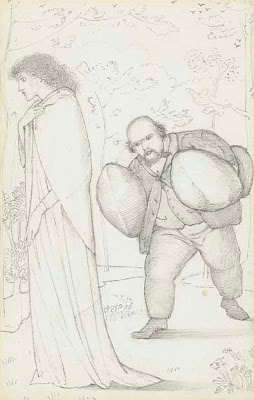 Provenance
Maria Zambaco and by descent in the family to
Mrs Wyndham Milligan; Sotheby's, Belgravia, 29 June 1976, lot 236 (sold £480).
with The Maas Gallery, London, where purchased by the present owner.

The present drawing was one of a group of sketches and caricatures from the collection of Burne-Jones's model and muse Maria Zambaco. An exceptionally beautiful member of the London Greek community, his affair with her began in the late 1860s and lasted about three years. The impact of the affair on Burne-Jones was profound and his drawings of her have a sadness and air of unearthly beauty about them. The affair between Burne-Jones and Maria Zambaco can be compared to Rossetti's relationships with Lizzie Siddall and then with Jane Morris, the wife of William Morris, pictured here. Like Rossetti, Burne-Jones saw Maria as symbol of his muse as much as a reality.

In the present drawing Burne-Jones, with his characteristic trait of satire, has depicted a rather portly Rossetti hurrying to the attention of a rather fey Jane Morris. Rossetti and Jane first became close while she was sitting for the figure of Queen Guinevere in the Oxford Union murals. However Rossetti was already engaged to Lizzie Siddall, who he married in May 1860. However not long afterwards in February 1962 Lizzie died of a laudanum overdose. William Morris at this time was heavily wrapped up in his work, so the stage was set for a renewal of Rossetti and Jane's Morris's former intimacy. In 1865 she was sitting to him for drawings and by 1868 he was working on a formal portrait. She was the model for his striking pastel of 1869, Pandora, Christie's, London, 14 June 2000, lot 14 (sold £2,400,000). Between 1870 and 1874 they contrived to spend as much time together as they could at Kelmscott Manor, the house which Morris and Rossetti had taken joint tenancy of. However Jane later maintained that the affair remained at the level of passionate romantic attachment rather than anything more physical.
http://www.christies.com/lotfinder/sir-edward-coley-burne-jones-bt-ara-dante/4110011/lot/lot_details.aspx?from=searchresults&intObjectID=4110011&sid=29ccab43-2054-4548-aedd-110b7f5db4cb
Posted by Hermes at 1:00 PM