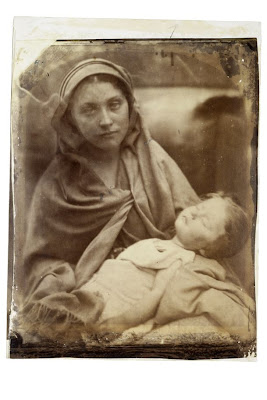 Despite the label "temperance", do viewers know how to read this image - poverty? mother love for her baby? Christian symbolism?

Cameron was talented and her images were powerful.

You're right in many ways:

This photograph is one of a series of nine that Julia Margaret Cameron made in 1864, her first year of photography. The series is entitled The Fruits of the Spirit and each mount bears a title corresponding to the virtues of love, joy, peace, long-suffering, gentleness, goodness, faith, meekness and temperance.

The photographs show a model as a contemplative Madonna. In all but one, she is posed in the manner of the Madonna and Child, with one or two infants. The model was Cameron's housemaid Mary Hillier, and she appeared so frequently and convincingly in the guise of Madonna that she was known in the Freshwater circles as 'Mary Madonna'.

Temperance could almost be read as a Pieta, the pose in which the Madonna holds the dead Christ. There is a resigned sadness and intensity to Hillier's gaze, and the slumped limpness of the body of the child suggests death. Cameron made another version of the photograph in which she printed the negative in reverse.

The series was the first of her photographs to enter a public collection. Cameron presented it to the British Museum in January 1865 and subsequently it transferred to the Victoria and Albert Museum, in 2000.