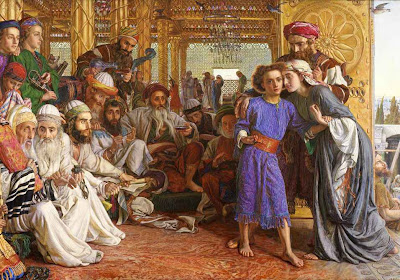 [The Finding of the Saviour in the Temple, 1854-5; 1856-60. Oil on canvas. Birmingham Museums and Art Gallery. ]
MINNEAPOLIS, MN.- The Minneapolis Institute of Arts (MIA ), offers visitors a rare glimpse into the life and work of 19th-century painter William Holman Hunt, with an exhibition of more than 60 iconic works by the artist who is considered to be the founder of the Pre-Raphaelite Brotherhood and has been deemed by some as the Damien Hirst of his day. “Sin and Salvation: William Holman Hunt and the Pre-Raphaelite Vision” opens June 14, with the MIA as the sole U.S. venue. “Sin and Salvation” provides a new interpretation of Holman Hunt’s work, revealing an artist who confronted the pivotal issues of his day: materialism, the crisis of faith, the changing role of women, and the relationship between the sexes. These themes, with their roots in the Victorian era, still resonate strongly with 21st-century audiences. This is the first exhibition since 1969 dedicated to the work and ideas of the British painter, and Pre-Raphaelite artworks are among the most popular in British museums and are rarely put on loan.
http://www.artdaily.org/index.asp?int_sec=2&int_new=30652
Posted by Hermes at 5:10 PM