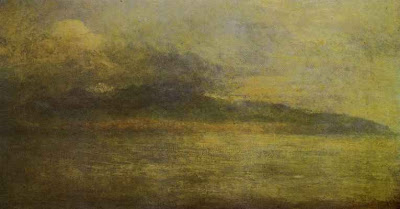 It was included in three of the Memorial exhibitions of 1905 following the artist's death :Manchester, Newcastle and Edinburgh

Mrs. Watts recorded that the idea for this painting came to Watts while on his honeymoon trip of 1886-87. Towards the end of their travels, the artist and his wife took a slow boat sailing around Italy: "A summer sea fog drifted about us one day, through which Corsica was suddenly revealed like opal and pearl, and then lost again. The disabled ship loomed strangely through the fog, and the two pictures Off Corsica and The Sea Ghost were painted later from the impressions of that day". The latter work is in the Watts Gallery. In a letter of 1892 to James Smith (whose collection of works by Watts is at the Walker Art Gallery), the artist called the painting Fog Off Corsica.
Posted by Hermes at 6:00 AM