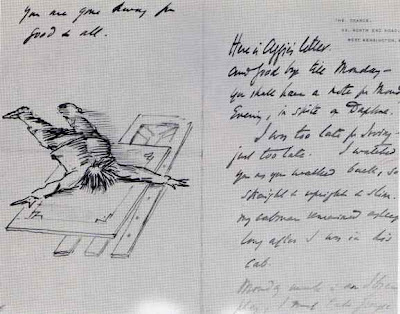 From the time of his first affair in the late 1860s, Burne-Jones felt the need for a sympathetic friend with whom to create a secret intimate world of images and ideas. Helen Mary Gaskell was 25 years his junior and had just the qualities the artist required -sadness of expression, intelligence and artistic insight. She was married to Captain Gaskell of the 9th Lancers, a man of the world in every sense, and she managed the situation with great tact. The Gaskell children, particularly Amy and Daphne, inspired innumerable comic drawings, allowing the playful side of Burne-Jones to escape and giving him a necessary release from the pervading sadness of his later years, especially after the death of William Morris in 1896.

The majority of Burne-Jones's letters to Helen Mary are in the British Museum.
Posted by Hermes at 6:00 AM