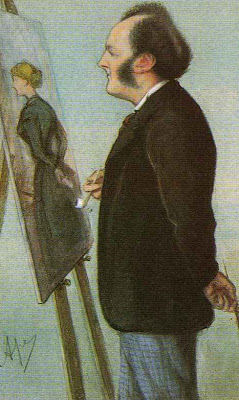 It is signed 'Ape' and dated 1871
Millais painted over 400 pictures and was enormously energetic in other areas such as education, charitable and public works. He put a lot of energy into helping establish the National Portrait Gallery in 1889 and encouraging Sir Henry Tate to found the Tate Gallery in 1892.
He was a very popular artist and the Graphic sold 600,000 copies of 'Cherry Ripe' (a picture Millais didn't like very much) when it was issued as a Christmas Special. At his peak Millais was earning £40,000 / annum, making him a millionaire in todays money.
Posted by Hermes at 6:00 AM