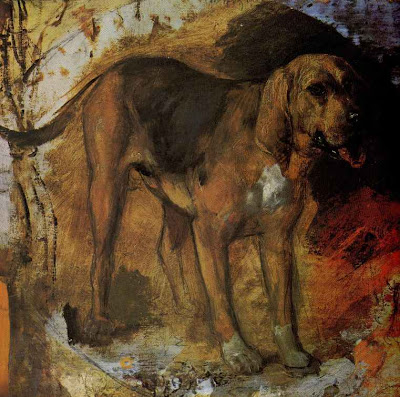 Given to William Michael Rossetti by the artist c. 1853,
oil on board.
circular diameter 10"

Holman Hunt's contributions to the Royal Academy exhibitions of 1847 and 1848 were both literary subjects containing bloodhounds. The dog was not an integral part of the scene illustrating Sir Walter Scott's Woodstock, exhibited in 1847, but the 1848 Royal Academy catalogue revealed the central importance of the dogs to The Eve of St. Agnes: The wakeful bloodhound rose, and shook his hide,
But his sagacious eye an inmate owns.

Although William Michael Rossetti considered his panel to be a study for the Keats subject, there is no exact correspondence. The bloodhounds were lent to the artist by John Blount Price of Islington, a wealthy friend who was later to supply Hunt with the horses for Rienzi. A similar oil panel of Hounds was sold at Sotheby's Belgravia on 9th April 1980.
Posted by Hermes at 6:00 AM

I know something about the history of William Holman Hunt, he changed his middle name from "Hobman" to Holman when he discovered that a clerk had misspelled the name after his baptism at the church , I think he is one of the most important painter!

One of the reasons why I like visiting your blog so much is because it has become a daily reference I can use in order to learn new nice stuff. It's like a curiosities box that surprises you over and over again.