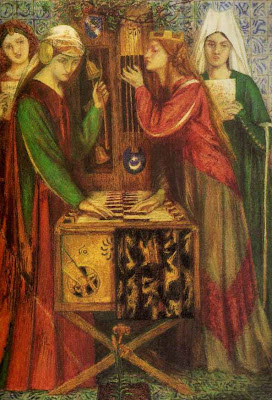 1856-7
Watercolour
Tate Gallery
Painted like a Medieval illustration with a theme of lost love probably based on his reading of Malory. It was exhibited at the Pre-Raphaelite show in Fitzroy Square in 1857 and was one of five watercolours bought by William Morris who wrote a poem based on it with the same name.
http://www.bartleby.com/246/743.html
The two Queen's are playing a Clavichord with two maids singing from sheet music. The Sun and the Moon on the instrument were symbols commonly used by Rossetti to denote the passing of time. The Holly seems to indicate the time of year.
Posted by Hermes at 6:00 AM