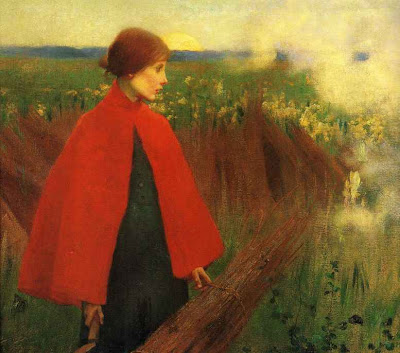 1890
Austrian, 1855 - 1927.
Marianne Stokes (neé Preindlsberger) was born in southern Austria and studied in Munich and France, where she worked under Colin and Courtois. She worked in the provinces as well as in Paris, and, like many young artists, was influenced by the rustic naturalists led by Bastien-Lepage. She adopted methods similar to theirs, and even though her subject matter gradually changed from rustic genre to medieval romance and biblical themes, her style continued to show her artistic allegiance clearly.
She exhibited throughout the 1890s at the Royal Academy, and held a joint exhibition with her husband, the English landscape artist Adrian Stokes, at the Fine Art Society in 1900.
http://en.wikipedia.org/wiki/Marianne_Stokes
Posted by Hermes at 6:00 AM

Do you know where this painting is currently?