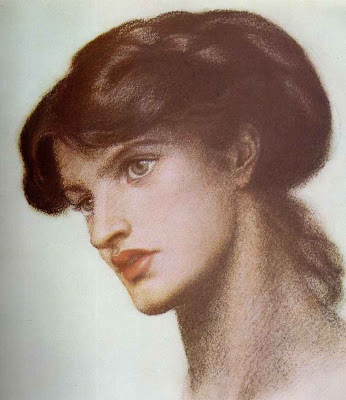 coloured chalks on buff paper
signed with monogram
1870
12 x 10"
A study for the right hand attendant for 'Dante's Dream at the time of the Death of Beatrice'
http://www.liverpoolmuseums.org.uk/walker/collections/19c/rossetti.aspx

This painting, commissioned by William Graham in 1869, was the largest of Rossetti's works and shows an episode from the Vita Nuova in which Dante in a dream sees his dead love laid upon a bier. In the painting two women attendants lower a pall strewn with symbolic blossoms of may flower over the dead Beatrice. The model for the figure was Mrs. Marie Spartali Stillman.

"For the ladies holding the suspended veil momentarily ere it covers the form and features of Beatrice. Miss Marie Spartali, the daughter of the Greek consul for London was one. She possessed a face superlatively beautiful. The other one was Alice Wilding and with these sympathetic faces he made his group pathetically complete." [Letters to Ellen Heaton].
Posted by Hermes at 6:00 AM

it's amazing thing with Rossetti...i once was very much into his obsession about Elizabeth Siddal.
I remember i was amazed when i first saw her real picture, after seeing works that she was a model to.
It was so great to see differences, and how Rossetti's love changed her on canvas.

here i see "portrait of Mrs Stillman" and it's so familiar to Siddal's portraits.
is this just pre-raphaelite canon of beauty, or where they both alike?
or did i got something wrong?
i'm confused...

The PRB and I suggest Rossetti in particular had a feminine ideal based on Medieval / Renaissance ideals.

I think Keira would have made a good model for Rossetti.

yeah..she has something very common in her face,
thanks for that link!