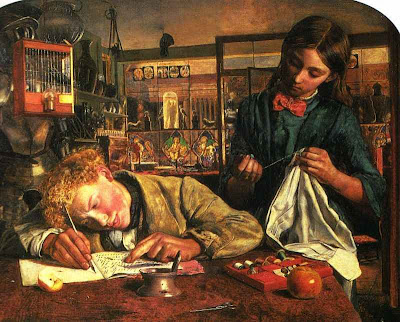 [Kit's First Writing Lesson] 1852
oil on canvas
Tate Gallery
.
1826 - 1869.
He first trained as a lawyer and later entered the Royal Academy where he was awarded a silver medal. He studied under Pre-Raphaelite artist William Holman Hunt and once shared a studio with him. He died at the age of 43. He married Maria Wheeler and had two children with her.
Posted by Hermes at 6:00 AM

this one doesn't look like straight pre-raphaelite painting, it's more realistic in shadows and lines i think, but it's very interesting, that this pre-raph mood is still preserved here.

Thanks Natalis, I do wander round the theme a bit and genre paintings like this interest me a lot. Is almost like a photo but adds depth and texture, like the red cheeks of the boy.

yes, it's more intense than in other images...