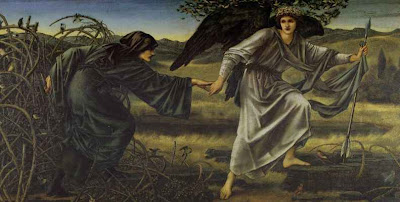 1896/7
oil
Tate Gallery
Inspired from Chaucer - Romaunt of the Rose.
The design dates from the early 1870's but the painting wasn't started till 1877 and was worked on for the next 20 years, completed only the year before hios death. An Italian model called Giacinto sat for the Pilgrim, originally bearded but later altered. His son, Philip Burne-Jones thought the original 'cold and miserable' and it was 'lightened' in tone by his Father. Sold for the astonishing sum of £5,775 it was later acquired by the Duchess of Sutherland. By 1943 his 'star' had faded so much, the National Art Collection, who gave it to the Tate, bought it for £94 10s.
Posted by Hermes at 6:00 AM

I've just came across to your blog.
Interesting blog!
Cheers..:-)