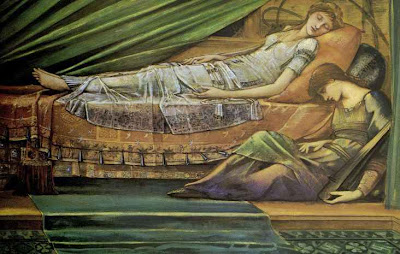 The theme of the Sleeping Beauty, adapted from Perrault's fairy tale and Tennyson's poem, pre-occupied Burne-Jones throughout all his working life, from his first designs for tile panels of c. 1862 to a circular gouache of the Prince embracing the Princess, reproduced in the Flower Book. The first 'Briar Rose' series of three oils, painted c. 1870-3, is now in the Ponce Museum of Art, Puerto Rico. When Burne-Jones repeated these compositions on a much larger scale he added a fourth, The Garden Court. This group was exhibited at Agnews in 1890 to great acclaim, bought by Alexander Henderson for £5,000 and later installed at Buscot Park, Berkshire where they are still in situ in the salon.

This work is a very large and finished study for the fourth and final painting of the series, 'The Sleeping Princess', without the left hand side which depicts two sleeping attendants. There are other minor differences between the study and the Buscot painting. The gouache has only a few token briars in the background, instead of abundant growth. Perhaps most important, the oil omits the scarlet heart on the princess's breast. This motif was surely Burne-Jones's tribute to his model and daughter, Margaret Burne-Jones, to whom the work is dedicated. On the 4th September 1888 she was married to Mr. J. W. Mackail, and it is therefore likely that the work was a wedding gift to the couple. The muted and elegiac mood of the work expresses Burne- Jones's melancholy at the loss of his daughter, which emerges clearly in his wife's 'Memorials'. Thus 'The Sleeping Princess' might be viewed as a valedictory image.
Posted by Hermes at 6:00 AM

and who's that girl next to the bed, waiting on a floor?

She looks like she has nothing but hope beside her.

Good point, I just thought (if I thought at all!) it was an attendent. Hope is a lovely word, we all need that.

it looks like it is...
but they have some other bounds also i think. Other way, she wouldn't be so sad.