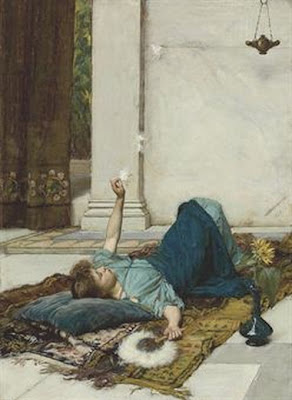 Waterhouse's most important works of the 1870s were remarkably melancholy. In classicized scenes such as A Sick Child Brought into the Temple of Aesculapius (1877) and The Remorse of Nero after the Murder of his Mother (1878), this budding talent, not yet 30 years old, created moody reveries in darkened rooms. Yet, the critic Claude Phillips observed later, 'it was impossible for a painter of Mr Waterhouse's susceptibilities not to be caught in the great naturalistic wave which swept Europe.'

Intrigued by the French Impressionist pictures that had stirred controversy worldwide since 1874 and by his hero Lawrence Alma-Tadema's recent shift to lighter tones, Waterhouse threw open his shutters in 1879, muting his melancholy and experimenting with the play of sunlight on models' forms. His colours began to lighten and he used shorter, broken brushstrokes that build up, in some areas, to a thicker impasto.
In this brighter key, Waterhouse developed two totally different paintings bearing the same title, Dolce Far Niente (Sweet Doing Nothing). Although smaller than the 1880 version now in the Kirkcaldy Museum and Art Gallery, the present picture of 1879 is far more compelling in both composition and colour. The Illustrated London News was particularly astute to praise its 'happy harmony of blue and bluish-green,' which delights and draws back our eyes even as they scan the rest of the scene.

Inspired in part by the Italianate pictures of women Dante Gabriel Rossetti painted from 1859 to 1882, Aesthetic-minded artists like Waterhouse favoured the theme of idleness because it liberated them from illustrating narratives and pointing morals, seeking only beauty through harmonious arrangements of form, line and colour. In Dolce Far Niente, the model's lethargy and closed-off setting removes her from everyday life, while her supine pose encourages male fantasy. Waterhouse had explored these avenues earlier, but by 1879 he was clearly referring to Albert Moore's famous pictures of maidens lounging in classical drapery with anachronistic Aesthetic props. (Waterhouse did not, however, emulate Moore's rigour in design and tonal modulation.)

Mistakenly catalogued in 1996 as The White Feather Fan because the model holds one in her hand, this picture is actually summarized by the sunflowers at lower right and in the background. The sunflower was a key emblem of Aestheticism, representing self-admiration in the 'language of flowers' familiar to all Victorians through popular literature. The model's partially averted face renders her a decorative form; like a sunflower, she faces the light streaming from above. The Magazine of Art cautioned that Dolce Far Niente was 'too fantastically imitated from the peculiarities of Mr Alma-Tadema's work': indeed it echoes Alma-Tadema's Water Pets and Play Garden, both of 1875. Both artists depicted a Roman girl absorbed in a trivial activity. Waterhouse used three floating feathers to lead the eye upward from the extended arm to the hanging lamp; the resulting arc focuses attention on the mottled wall, a crucial element in this composition not only for its size and centrality, but also because it reflects light falling on the figure.

This picture's bold, asymmetrical design and lighting reveal Waterhouse's awareness of what was happening across the Channel. So, too, does the bravura handling of an oil sketch of this model (private collection), dedicated on its reverse to the Scottish artist Robert Payton Reid (1859-1945), who studied in Paris and Munich. The nature of the men's relationship is unknown, and it is possible that they met on the Continent. Suggestive of Italian origin, the crooked nose and curly red hair of the model here also reflect the current vogue for the actress Sarah Bernhardt's exotic beauty, celebrated in the renowned portrait by Jules Bastien-Lepage (1848-84) exhibited at the Paris Salon in 1879. This model also appears in Waterhouse's La Favorita, exhibited at the Royal Academy in 1879 and now known only through a line drawing.

We are grateful to Peter Trippi for his help in preparing this catalogue entry.
Posted by Hermes at 5:00 PM

I love your posts.I have always been a fan of the Pre Raphaelites and Arts and Crafts since I was a 16 yearold just starting work in a library and getting lost in the art section!

Thank you, to me they are just genius.