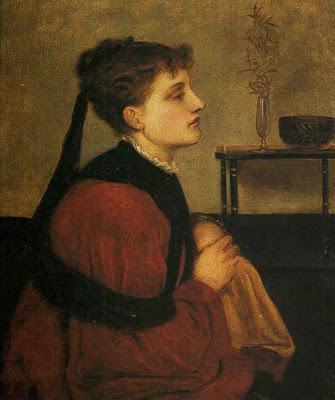 Simeon Solomon's Marguerite is a wonderful example of the type of figurative composition halfway between a portrait and a genre subject, and with ambiguous and even disturbing associations - that painters in the artistic circle that formed around Gabriel Rossetti in the 1860s were making. In its abstract refinement of line and colour, and self-contained and uncertain mood, it is a representative work of the early Aesthetic Movement. When it was shown in 1871, five years after it was painted, the conservative Art Journal remained unsure as to its artistic purpose, suggesting that it should have been titled A Reverie, for 'as the title stands we feel there is something lacking to complete our ideal of Goethe's Marguerite'. Despite his uncenainty as to the essential subject of the painting, the same critic recognized its intrinsic quality: 'Nevertheless, the modelling of the face is very beautiful, and the half-shut eye is tender and full of love.'

This painting has a particularly interesting history, having been owned by Andrew Lang, the Scottish poet, anthropologist, Homeric scholar, and author and collector of fairy-tales. Lang then gave the painting to his close friend and literary collaborator H Rider Haggard, author of King Solomon's Mines (1886). At about the turn of the century, when Solomon was still alive but living in poverty, a new interest in his painting and drawing grew up in certain circles. In 1905 Rupert Brooke inquired of a friend: 'Did you ever hear of S. Solomon. painter? He died the other day, and I read an article on him in the Westminster (written by Robert Ross, the friend and literary executor of Oscar Wilde, 24 August 1905, pp.1-21]. He was a delightful painter of 1850-70-about: but he succumbed to drink etc., and became "impossible" .... Why haven't I ever heard of him?' (Quoted by Gayle Seymour in her article 'The Trial and its Aftermath'. Solomon - A Family of Painters, exhibition catalogue, Geffyre Museum, London, 1985, pp.28-30)
Art Journal. 1871, p.285