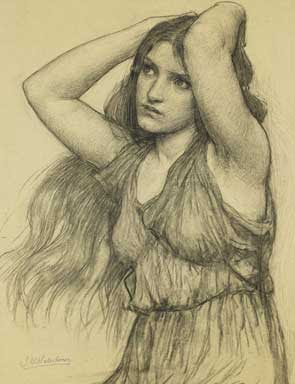 I posted on the auction

but have now tracked down the actual auction

A beautiful young girl, slight of build and with long sleek hair, big watery eyes and
delicate features, of a type that would not be out of place in the fashion magazines of the twenty-first century; this is what has become known as the 'Waterhouse Girl'. As stereotyped as the 'Stunners' of Rossetti's art earlier in the century, the models for Waterhouse's paintings from the early 1890s onwards played a pivotal role in the changing conception of female beauty, making way for the movie starlets of the early twentieth century. Similar to the fragile angels of Burne-Jones and his followers, they are more warm-blooded and perhaps closer to the woman painted by one of Waterhouse's contemporaries George Clausen. However, whilst Clausen painted pretty models dressed for field work toiling on the land or standing on the thresholds of farmhouses, Waterhouse painted them as the naiads, enchantresses and tormented medieval maidens of mythology and literature. He sought to depict the fragility and delicate sexual allure of the women that dwelt between the worlds of the gods and the mortals, the nymphs and mermaids that seduced shepherds and fishermen or the princesses carried off by lustful Gods while they gather flowers or sleep beside the sea.

The allegorical connection between women and flowers linked the subject of Flora with
that of Persephone's return from the underworld and in a reversal of roles, Adonis'
reawakening amid a garden of anemones that had grown from his blood (also the 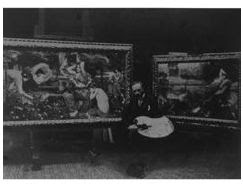 Fig. 1
photograph of waterhouse with
flora and the zephyrs (left) and
ariadne (right)

This beautiful drawing relates to the central figure in Flora and the Zephyrs but may
also have influenced Ariadne, Waterhouse's depiction of the Minoan princess
abandoned by the hero Theseus on the island of Naxos. Although a fine draughtsman,
few drawings by Waterhouse of this quality have survived and although the subjects he
chose were those favoured by earlier generations of painters, his draughtsmanship
demonstrated that he was very much an artist of his time. Energetic, confident and
expressive this drawing shows that Waterhouse's technical skill was remarkable.
Posted by Hermes at 5:00 PM

Thank you for a beautiful image and an excellent article.

Such a wonderful sketch and painting.

Congratulations! Your post was selected to be included in the November issue of the Art History Carnival.

Keep up the good work! I'm glad that I discovered your blog in the review process. Waterhouse is a particular favorite of mine; I look forward to more posts on him.

Thank you M. Waterhouse is not my favourite but this sketch is outstanding. I'll look out for your post.