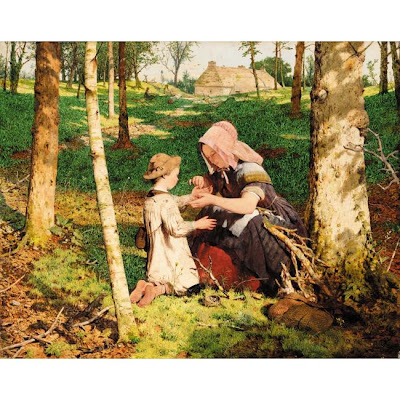 
signed l.r.: J. Ritchie; signed and inscribed on an old label pasted to the stretcher: No. 2/ Extracting a Thorn"/ John Ritchie

... go to nature in all singleness of heart... rejecting nothing, selecting nothing and scorning nothing; believing all things to be right and good, and rejoicing always in truth.' John Ruskin, Modern Painters.

These famous words by John Ruskin resounded through the Nineteenth Century, becoming an integral part of the mantra of the Pre-Raphaelite Brotherhood and their admirers and followers. This interest in nature's every detail in it's unadulterated form was seen as an artistic and religious celebration of the magnificence of the natural world and artists rediscovered the joy and inspiration of painting the verdant meadows and riverbanks of Britain's countryside. Artists like John William Inchbold and William Holman Hunt, John Everett Millais and John Brett painted the English landscape with a power and drama as resplendent in every minute detail as those by John Constable, but vibrating with a more vibrant and glorious colour.


John Ritchie was one of the committed of followers of the PRB who worked in the sphere which orbited the small group of artists at its core. His experiments in the Pre-Raphaelite vein are extremely rare and indeed it is uncommon to find a painting in private hands, which so perfectly captures the primary elements of early Pre-Raphaelitism. The landscape is reminiscent of the very best of Holman Hunt, The Hireling Shepherd (Manchester City Art Gallery) and Valentine Rescuing Sylvia From Proteus (Birmingham City Art Gallery) both of 1851, in the way Ritchie captured the sunlight glinting on luscious grass and the lichen-covered trunks of trees. The best work of John William Inchbold, such as the Study in March of c.1855 (Ashmolean Museum) is also comparable with Extracting the Thorn.

John Ritchie was a short-lived artist whose work showed great promise in the 1860s and early 1870s, a time when British art was experiencing a surge in energy as the influence of Pre-Raphaelitism permeated the younger generation of artists. His work is comparable with that of William Dyce in the late 1850s and early 1860s, with the same clarity of lighting, bright colouring and superb rendering of natural detail. Extracting the Thorn shares similar elements with Dyce's famous Titian Preparing to Make his First Essay in Colouring of 1857 (Aberdeen Art Gallery and Museum), such as the rendering of the knarled bark of the birch trees and the wonderful carpet of the grass and field flowers.

Extracting a Thorn would appear to have been painted in the earliest years of Ritchie's professional career and bears similarities with a work entitled The Shadow on the Tree (Christie's, 10 June 2003, lot 123) which was exhibited at the Academy in 1861. Both pictures show a marvellous attention to detail as fine as any of the better-known Pre-Raphaelites, each dried leaf and blade of grass painted with minute and careful dexterity. The Shadow on the Tree is perhaps more sinister with the shadow of an approaching unseen visitor cast towards an awaiting young maiden and her agitated little dog. Extracting a Thorn is a more attractive subject of maternal care and affection, in which a tender moment is captured beautifully. The intimate domestic subject of Extracting a Thorn and The Shadow on the Tree was a divergence from Ritchie's usual subject matter. Ritchie is best-known for his imaginary genre scenes in Sixteenth and Seventeenth Century costume, such as The Young King James VI at Church, A London Merchant Fishing for Salmon off the Old Swan Stairs in the Sixteenth Century, Stop Theif! and Little Nell and Her Grandfather Leaving London. Ritchie commenced exhibiting in 1858 when he exhibited the first of his costumed genre paintings The Huguenot Conventicle Suppressed, at the Royal Academy. In the same year he exhibited two works at the British Institution, A Winter's Day in St James's Park and the beautiful A Summer's Day in Hyde Park, which is now at the London Museum.