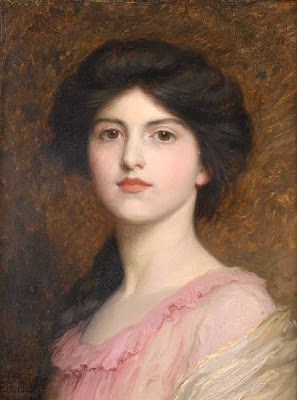 This portrait can be seen as part of a bigger movement in Dicksee's career in which he fully embraces portraiture as a genre, above the 'costume' pieces that he had become famous for late in the nineteenth century. The influences of Millais and Leighton are evident particularly in the handling of the paint and the ochre background. Dicksee had studied under both artists at the RA schools from 1870. He would go on to be elected ARA in 1881, RA in 1891 and PRA in 1924, fully establishing his place in the lineage of great British artists. Late portraits such as this can be seen as retaining the sense of Victorian drama that was by 1913 rapidly disappearing in a changing world.
Posted by Hermes at 6:00 AM