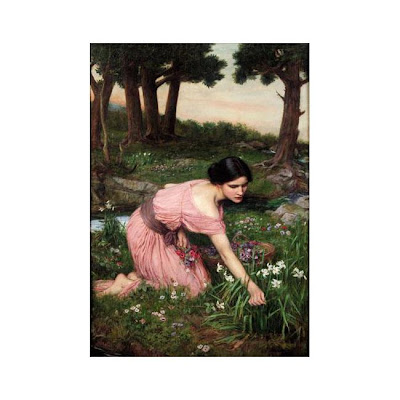 John William Waterhouse established his reputation in the 1880s and 1890s as a painter of literary and mythological subjects, almost always including beautiful young girls, but also often introducing themes with tragic implications. Works such as Ophelia and Miranda, to name two of his paintings of Shakespearean heroines, The Lady of Shallot - a subject from Tennyson - or The Awakening of Adonis or Flora and the Zephyrs, each inspired by ancient mythology, lead to the conclusion that Waterhouse was one of the last and greatest subject painters of British art.

In the last decade or so of his career, essentially from about the turn of the twentieth century, he increasingly painted themes which are unspecific in terms of narrative, but instead loosely evocative of the ancient world. A theme which preoccupied him over a long period, and which led to a memorable series of single figure compositions, was that of a landscape in spring with the single figure of a girl gathering flowers. Even when these may be recognised as echoing the painter's earlier mythological works in showing figures suggestive of the ancient legends - of, for example, Psyche, who was brought to a meadow of flowers by Zepherus, or that of Persephone and her return from the Underworld to rejoin her mother Demeter at the return of spring, or of the death of Narcissus when he fell in love with his own image, of which he caught sight when reflected in the surface of the stream - the meaning of these later paintings is usually veiled or ambiguous.

Perhaps the clearest indication that Waterhouse sought to evoke mythological legend in the present painting, even if there is no ostensible narrative subject, is the choice of the two varieties of flowers - narcissi and anemones. The former is of course associated with Narcissus himself, because after his death narcissi grew at the edge of the stream in which he drowned and are therefore a symbol of rebirth, while purple and red anemones sprang up from the ground from the drops of blood which fell from the body of Adonis at the moment of his death, gored by a wild boar into which Ares, a former lover of Aphrodite had transformed himself in a fit of mad jealousy when told that she loved Adonis rather than him.

The series of flower gathering girls seems to have originated with the painting Windflowers (private collection) of 1902, in which the flowers picked are about to be scattered by a gust of wind. The present subject, which was shown at the Royal Academy in 1910, appears to be a worked up and completed version of a sketch titled Flora (fig.1, Sotheby's, London, 19 June 1991, lot 236). The sequence was completed in 1913, when Waterhouse exhibited a painting entitled Narcissus (fig.2, Sotheby's, London, 20 November 1996, lot 257), in which the same model appears, even wearing the same or a similar pink diaphanous dress as is shown in the present subject. The principal difference between the two is that while in the later painting the figure is standing, here she is seen on her knees as she stretches out to pick the narcissi.

Waterhouse may have known, and was perhaps consciously or unconsciously imitating, Burne-Jones's painting The March Marigold (Piccadilly Gallery, London) when he treated subjects of girls picking flowers. This particular painting by Burne-Jones was a work of the early 1870s, and shows a stooping figure in flowing draperies picking flowers at a stream's edge. As a subject, it seems to derive from the artist's earlier sequence of drawings which were intended to illustrate the legend of Cupid and Psyche as told by William Morris in the verse cycle The Earthly Paradise. If so, it, like Waterhouse's Spring Spreads One Green Lap of Flowers, has evolved into an independent image no longer serving a story-telling purpose, but instead subscribing to the aesthetic principle that painting should be concerned with mood rather than narrative, combined with abstract qualities of composition and colour which are intrinsically pleasing for their own sake.

Lovely it has such a purity about it.