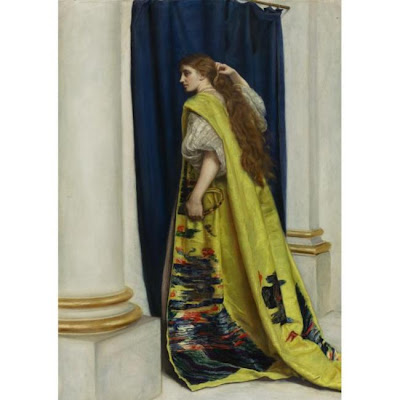 Soon after seeing Millais’ work, Anne Thackery, daughter of William Thackery, wrote “I cannot help longing to know the fate of ‘Esther’… after she went in through the curtains.” (as quoted in Millais, p. 385). The Biblical Queen had long been a popular subject for artists from the Renaissance to the nineteenth century's Pre-Raphaelite Brotherhood, who thrilled in the dramatic Old Testament tale of the great Hebrew beauty's daring courage. However, Millais' work is unique in that he chooses to depict Esther without obvious narrative force; instead, he captures an intermittent scene where she “put on her royal apparel, and stood in the inner court of the king’s house” (Esther, 5:1), preparing to set in motion an elaborate plan to defend her people from King Ahasuerus' genocide. The story of Esther is translated into the aesthetic possibilities of a woman dressed in an elaborately brocaded grown, grasping a crown in one hand, her other pulling beads through her long auburn tresses. The tense mood of the moment is revealed in color contrasts and geometric arrangements, as the Queen seems poised to push through the heavy blue curtains.

In its focus on aesthetics as narrative, Esther is obviously different from Millais' major, more conventional, Academy paintings. This work builds on experiments first made in The Black Brunswicker (1859-60, Lady Lever Art Gallery, National Museums, Liverpool) and Eve of St. Agnes (1863, Ashmolean Museum, Oxford) in which the realistic tonal capture of silk skirts, brocaded fabrics, and atmospheric settings superceded distinct action or compelling situation. The arrangement of model and props was crucial inspiration, and for the present work, Millais carefully selected a jacket for its color and texture: “The robe thrown over the shoulders of ‘Esther’ was General Gordon’s ‘Yellow Jacket.’ In this ‘Yellow Jacket’ General Gordon sat for Valentine Prinsep, R.A., for the portrait of the Royal Engineer's mess-room at Chatham. Millais so admired this splendid piece of brocade that he dressed Miss Muir Mackenzie in it, but turning it inside out, so as to have broader masses of colour." (Millais, p. 384). Using the elaborate patterns of the jacket, the artist moves away from morality, plot, and meaning, to focus on colors and contours—consequently, the narrative subject becomes a painted portrait of timeless beauty. As such, this work would prove inspirational to several of Millais' contemporaries. William Michael Rossetti noted its parallels to Whistler's Symphony in White No. 2: The Little White Girl (1864, Tate Gallery, London) while Waterhouse credited the work for his Marianne (1887, Private Collection). For these artists and Millais, Esther was an important work, poised, just as its royal subject, to enter unchartered, revolutionary territory.
Posted by Hermes at 1:00 PM

What private collection has this painting now? Is there a high resolution version anywhere? Would like to take a closer look.