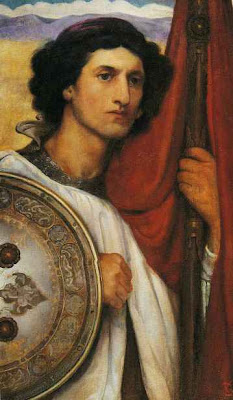 Kate Bunce was one of the older members of the Birmingham Group of artists who were so closely associated with the Arts and Crafts Movement. Her father was John Thackray Bunce (1828-1899). editor of the Birmingham Daily Post and a leading member of the city's Liberal establishment, being deeply involved with the administration of the Municipal School of Art and the formation of the City Art Gallery. Like so many of the Birmingham Group, Kate studied at the School of Art under Edward R. Taylor and painted one of the murals illustrating scenes from local history which the students carried out for the Town Hall about 1890. She was also typical of the Group in being profoundly inspired by the Pre-Raphaelites, many of whose works were currently entering the City Art Gallery with the active encouragement of her father. Rossetti in particular influenced her style and choice of subject matter. She exhibited four pictures at the Royal Academy (1887-1901) but also supported the Royal Birmingham Society of Arts, becoming an Associate in 1888, and the New Gallery in London: in 1901, together with Walter Crane, Joseph Southall, Arthur Gaskin, J.D. Batten and others, she was among the members of the newly-formed Society of Painters in Tempera who showed there in a group. A staunch Anglo-Catholic, she was also responsible for a norther of decorative paintings in churches, notably a reredos of 1904 at St Mary's, Longworth, Oxfordshire, which has a beaten metalwork frame by her sister Myra (see Alan Crawford (ed.) By Hammer and Hand, 1984, pp.77-9).

A Knight is one of the very few easel paintings by Kate Bunce which are known to survive. The other most important examples are Melody, or Musica (Birmingham City Art Gallery), a very Rossettian composition of c.1895-7 which is often reproducted: The Keepsake (Birmingham City Art Gallery), an illustration to Rossetti's poem 'The Staff and Scrip' which was exhibited at the New Gallery in 1901; and A Chance Meeting, another illustration to Rossetti, which appeared at the New Gallery in 1907.