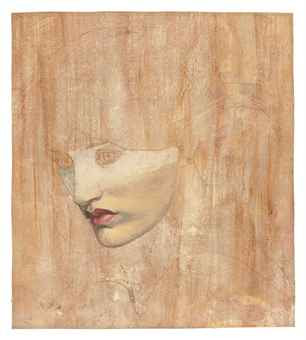 Rossetti's Proserpine, wrote H. C. Marillier in his monograph of 1899, 'has a very complicated history attached to it, and is without exception the most difficult puzzle in connection with his artistic work'. The composition, modelled by his muse and mistress Jane Morris, shows Proserpine in the gloomy depths of Hades, holding the pomegranate from which she has taken the fatal bite that will prevent her return to earth. It was a concept that had deep personal significance for Rossetti, and he reworked it obsessively in the early 1870s, determined to give it definitive expression and to capture the essence of Jane's beauty. As he put it to the landscape artist G. P. Boyce in 1873, 'I am hard at work on a picture of Proserpine, which I have begun and re-begun time after time, being resolved to make it the best I could do'. In all, eight versions seem to have been committed to canvas, although by no means all were finished. Some were abandoned at a preliminary stage, some were cut down to form independent pictures, and some do nothing more than flit like tantalising ghosts through the existing records. The best known version is the one in Tate Britain, completed for Frederick Leyland in 1874.

The present version, dating from 1872 according to an old inscription on the back, is clearly both unfinished and cut down from a larger canvas. This has been prepared with a ground applied with bold brush-strokes and, when dry, toned with a wash of transparent brownish paint. The outlines of the head have then been drawn in a stronger brown, possibly by an assistant working from the definitive study of 1871 now in the Ashmolean Museum, Oxford (Surtees 233A). Rossetti has then begun to work up the forms in more opaque oil paint, focussing particularly on the lips, which appear to be almost finished.