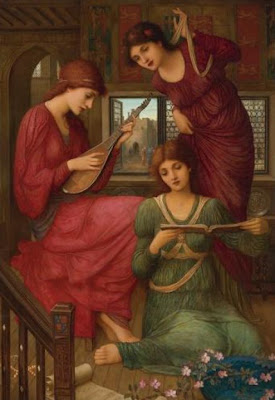 Steven Kolsteren, 'The Pre-Raphaelite Art of John Melhuish Strudwick (1849-1937)', The Journal of Pre-Raphaelite and Aesthetic Studies, vol. I: 2, Fall 1988, p.8 and 12 no. 3 in the checklist of paintings by Strudwick (marked 'present whereabouts unknown')


'How sad it were for Arthur, should he live,
To sit once more within the lonely hall,
And miss to hear high talk of noble deeds
As in the golden days before thy sin.'
TENNYSON, IDYLLS OF THE KING

Of all the painters who formed the late nineteenth-century manifestation of romantic Pre-Raphaelitism, a movement which owed much to the example of Edward Burne-Jones and more remotely to Dante Gabriel Rossetti, John Melhuish Strudwick is the most remarkable. Because he painted so slowly, and in such a meticulous style which he
never attempted to adapt or simplify so as to be less technically exacting, he is represented by a small but precious corps of works. The present painting which was exhibited at the New Gallery in 1907, his last exhibit there, exemplifies the essential qualities of refinement and other-worldliness of his art. Strudwick was preoccupied by the subject of passing time or of an imagined golden age, from Passing Days of 1878 (sold in these rooms, 10 November 1981, lot 39), The Gentle Music of a Bygone Day of 1889 (private collection) and When Apples were
Golden and Songs were Sweet, But Summer had Passed Away of 1906 (Manchester City Art Gallery). As Steven Kolsteren has pointed out; 'Strudwick's private dreamworld is not a perfect hiding place, being continually affected by time and decay' (Steven Kolsteren, 'The Pre-Raphaelite Art of John Melhuish Strudwick (1849-1937)', The
Journal of Pre-Raphaelite and Aesthetic Studies, vol. I: 2, Fall 1988, p.8)
The subject shows three beautiful female figures in a medieval chamber at the bottom of a staircase. On the left sits a damsel clad in rose-coloured robes playing a type of archaic lute, whilst beside her, dressed in green is a second girl holding a song-book. A third girl, dressed in a darker red robe, lifts a veil from her ear and stoops forward to listen to the music played by the other two figures. At the side of the girl dressed in green are pale wild roses growing over a knight's shield, reminiscent of Burne-Jones' Briar Rose series of pictures painted in the 1880s
(Buscot Park, Oxfordshire). The title is taken from Tennyson's Idylls of the King from the part of the poem where Guinevere talks of her regret of her sins and desire to return to the idyllic time of her youth. The central figure dressed in green may therefore depict the young Guinevere, attended by two of her companions before she had met Arthur or Lancelot. The crown depicted on the bronze salver behind her and the lions rampant and Fleur-de-Lis on the heraldry probably relate to King Arthur whilst the knight carrying a golden sword and being crowned by angels, depicted in the panel above the window, is clearly the king her future husband holding Excalibur. The wild roses possibly relate to the illicit love of Lancelot.

In the Golden Days contains one of the central themes of the English Aesthetic Movement, the sense of sound evoked by the musical subject. The work follows in a similar vein to Summer Songs of 1901 (sold in these rooms, 13 December 2005, lot 23) which similarly depicts a group of girls making music. Strudwick had also painted a
series of various St Cecilia subjects in the late 1890s (Walker Art Gallery in Liverpool, Williamson Art Gallery in Birkenhead and elsewhere). As John Christian has written, 'Like Burne-Jones, Strudwick loved to paint compositions in which a mood of wistful sadness is evoked by a group of female figures playing musical
instruments' (The Last Romantics- The Romantic Tradition in British Art- Burne Jones to Stanley Spencer, exhibition catalogue, 1989 (under the discussion of Strudwick's 1897 St Cecilia), p.94).A crucial formative experience in Strudwick's move towards a style of art of technical refinement and aesthetic subtlety occurred in the
early 1870s when he was employed as a studio assistant first by John Roddam Spencer Stanhope and then by Burne-Jones. Strudwick's works were repeatedly rejected by the Royal Academy and his professional prospects were uncertain. However, in 1876 his painting Song without Words (sold in these rooms, 8 June 1993, lot 22) did
gain admission (it was in fact his only contribution to the Royal Academy summer exhibitions in his entire career).

The work caused a great stir among those who were curious to know how such a quaint and yet technically demanding work could have been undertaken by an otherwise unheard of artist. According to George Bernard Shaw, who wrote the article about Strudwick which is the principal source of information about the artist, the sale of
Song without Words marked the critical turning-point in the painter's fortunes. He 'promptly hired a studio for himself; and since that time his vocation as an artist has never been challenged. There is no such thing as an unsold picture by Strudwick; and so the story of his early struggles may be said to end there' ('J.M. Strudwick', Art Journal, 1891, pp.97-101).

In reply to the accusation that Strudwick was merely an imitator of an historical style of painting, Shaw wrote: 'There is nothing of the fourteenth century about his work except that depth of feeling and passion for beauty which are common property to all who are fortunate enough to inherit them'. His paintings are highly sophisticated expressions of an anti-Utilitarian counter-culture in the late Victorian world, and were esteemed for their complete indifference to all that was modern, or indeed distinctly of any age.
Posted by Hermes at 6:00 AM