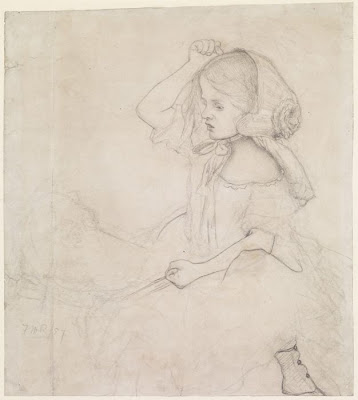 Following the rejection of his design for 'Cromwell on his Farm' (Whitworth Art Gallery, Manchester) by his dealer D. T. White, Brown thought up a new domestic subject in June 1856. At first it was called 'Stolen Kisses are Sweet' but, inspired by Hogarth, it became the more moralistic 'Stages of Cruelty.' The composition depicts a young woman spurning her lover, whilst a little girl in the foreground whips her dog with a bunch of Love-lies-bleeding. Brown used his second daughter Cathy as the model for the young girl, noting in his diary for 1857:

'as Hunt held out some prospect of Fairburns coming to buy the Lilac leaves, I set at it & painted the convolvulus out in the open air, composed & drew in the child, painted in the Love-lies-Bleeding, worked at the lovers head & at the girls, in all I suppose 3 weeks' (Virginia Surtees, ed., 'The Diary of Ford Madox Brown,' p. 199).

No commission came and the painting was worked on only intermittently during the 1860s. It was eventually finished in 1890 for Brown's Manchester patron Henry Boddington (and is currently in Manchester Art Gallery). By this time Cathy had children of her own and her daughter Juliet became the model for the girl in the completed canvas.
LM


Her earliest memories were of modelling for her father as a babe in arms, and visits by the Rossetti brothers. She Attended Queen's College and was trained in art by her father, Ford Madox Brown. She also worked as his model and studio assistant. Her first exhibition was in 1869 and there after chiefly painted in watercolors. In 1872 she married musicologist, Franz Hueffer. Her husband's death in 1889 left her in financial straits and she was denied a Civil List pension.
Posted by Hermes at 12:39 PM