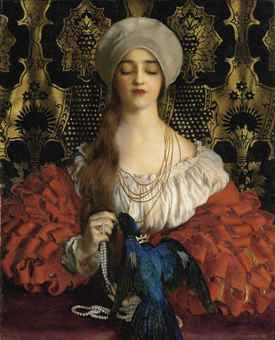 Frank Cadogan Cowper was born at Wicken in Northamptonshire, where his maternal grandfather was rector. He studied art at the St John's Wood Art School and then spent five years in the Royal Academy Schools (1897 -1902) before entering the Cotswold studio of Edwin Austin Abbey. After six months working with this American muralist, who, like his friend John Singer Sargent, had taken up residence in England, Cowper completed his artistic education by studying for a while in Italy.

Although he exhibited widely, supporting the Royal Watercolour Society and the Royal Institute of Painters in Oil Colours, as well as sending to the Paris Salon, Cowper remained loyal to the RA, where he exhibited regularly from 1899 until his death nearly sixty years later. He became an Associate in 1907 and a full academician in 1934. Throughout his life he painted subject pictures, although as the taste for these declined in the early years of the twentieth-century he turned increasingly to portraits, specialising in glamorous and slightly fey likenesses of young women.

Cowper's early work is strongly influenced by the Pre-Raphaelites, but by about 1906 he was adopting a more Renaissance idiom, often with an emphasis on rich brocades to create a decorative effect. His RA diploma picture, Vanity, exhibited in 1907, is particularly significant since it borrows motifs from Giulio Romano's portrait of Isabella d'Este at Hampton Court, a picture which had inspired the young Burne-Jones half a century earlier. In 1908-10 he contributed to the murals illustrating Tudor history which a group of artists, supervised by his former master, Abbey, painted for the Commons' East Corridor in the Houses of Parliament.

Cowper spent the early part of his life in London, occupying studios in St John's Wood, Kensington and Chelsea. The Blue Bird was painted at 2 Edwardes Square Studios, a southerly outpost of the artists' colony in Holland Park that had sprung up in the later nineteenth-century under the leadership of the President of the Royal Academy, Sir Frederic Leighton.

At the end of the Second World War, Cowper moved to Gloucestershire, settling at Fairford, not far from where he had served his apprenticeship with Abbey. He is often seen as the last exponent of the Pre-Raphaelite tradition. As such, he was patronised by Evelyn Waugh, a pioneer of the Victorian revival, and included in The Last Romantics, the 1989 exhibition at the Barbican Art Gallery that celebrated the survival of Pre-Raphaelite values into the age of Modernism. In fact he was responsible for one of the most astonishing examples, The Three Queens find Lancelot sleeping, exhibited at the RA as late as 1954.

The Blue Bird appeared at the RA in 1918, the last year of the Great War. Military images dominated the exhibition and the picture must have struck an incongruous note amid the portraits of generals, tributes to indomitable Tommies, romanticised accounts of 'bringing up the guns', and poignant war memorials. There seems to be no iconographical connection with Maurice Maeterlinck's play The Blue Bird, although Cowper must have been aware of the phenomenally successful staging of this 'transcendental pantomime' at the Haymarket Theatre, London, in 1909-11. The costumes and sets were by Frederick Cayley Robinson, who also illustrated the text when it was published by Methuen in 1911.

The picture does, however, undoubtedly relate to Madame d'Aulnoy's fairy tale of the same name, first published in 1697. This tells of a beautiful young princess, Fiordelisa, who falls in love with a handsome prince. He returns her love, but her wicked step-mother, wanting him to marry her own ill-favoured daughter, Turritella, shuts her up in a tower and attempts to blacken her name with her suitor. When the prince, refusing to marry Turritella, is transformed into a Blue Bird by her fairy godmother, he flies to the tower and holds amorous tête-à-têtes with Fiordelisa, bringing her presents of jewels as tokens of his affection.

Cowper shows the lovers enjoying one of these trysts, the princess holding a rope of pearls that the Blue Bird has evidently just given her. The story was retold by Andrew Lang in his Green Fairy Book (1892), one of the eleven 'coloured' Fairy Books that he produced for Longmans between 1889 and 1910. All were illustrated by H.J. Ford, and one of his designs for 'The Blue Bird' shows the same subject as that represented by Cowper's picture.

Formally, the picture is a good example of Cowper's neo-Renaissance-cum-neo-Pre-Raphaelite style, repeating the formula he had established with Vanity eleven years earlier and paying homage to Rossetti's half-length likenesses of beautiful models with exotic accessories, an idiom itself owing much to sixteenth-century Venetian painting. Like Rossetti, he gives his composition a decorative, almost heraldic, character and reduces the picture space to a narrow foreground plane. Both objectives are achieved by introducing a backdrop of the rich brocade that is almost a signature with Cowper.

This motif is derived from the so-called 'cloth of honour' that so often hangs behind the Virgin and Child in Italian Renaissance paintings (other works by Cowper establish the link beyond doubt). Meanwhile portraits of the Renaissance period, particularly those of the early German masters, inspire such details as the model's slashed red sleeves, her close fitting coif, and the chemise gathered across her neck. As for the Blue Bird's crown-shaped collar, intended to symbolise his royal status, this recalls medieval livery badges in which such collars are often worn by animals. If Cowper had an example in mind, however, it cannot have been the famous Dunstable Swan Jewel in the British Museum, which was not discovered until 1965. A more likely possibility is the Wilton Diptych, where badges in the form of white harts wearing crown collars are worn by all the angels and the figure of King Richard II. But even this did not enter the National Gallery until 1929.