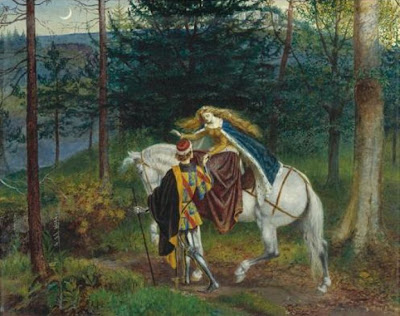 'I met a lady in the meads,
Full beautiful - a faery's child,
Her hair was long, her foot was light,
And her eyes were wild.

I made a garland for her head,
And bracelets too, and fragrant zone;
She looked at me as she did love,
And made sweet moan.

I set her on my pacing steed,
And nothing else saw all day long,
For sidelong would she bend, and sing
A faery's song.'

John Keat's poem of 1819 La Belle Dame sans Merci was one of the most popular subjects for those Victorian artists that were drawn to romantic, medieval subjects and well-known paintings of the theme were made in the later nineteenth century by John William Waterhouse, Frank Cadogan Cowper, Frank Dicksee, Henry Meynell
Rheam and Arthur Hughes. These rather glamorous romances were slightly at odds with the strange and delightfully eccentric subject described by Keat's which was more suited to the more claustrophobic and spiky style of the original Pre-Raphaelite Brotherhood. Curiously Rossetti was the only member of the Brotherhood to seriously
attempt the subject of La Belle Dame sans Merci and he abandoned the subject after making only a few preliminary drawings. The present painting is therefore perhaps the most completely realised depiction of the subject from this period. A watercolour version is also known, with the addition of ghostly apparitions (private collection).
Posted by Hermes at 6:00 AM