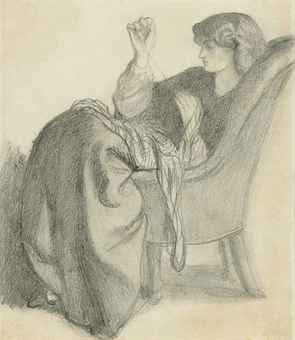 The drawing is undated but is undoubtedly a work of the early 1860s. Confusingly, Marillier assigns it to 1861 in his check-list, but suggests in his narrative that it 'may have belonged to...a somewhat later period'. Virginia Surtees opts for 1861.

In any event, the drawing belongs to an intermediate phase of Rossetti's relationship with Jane Morris. It is a few years later than his 'discovery' of her in Oxford in 1857 and her appearance in his contemporary designs for the Union murals. But it is earlier than the well-known photographs for which she posed in his garden in Cheyne Walk in the summer of 1865 and the many studies of her from the early 1870s when they had embarked on their protracted and ultimately frustrating affair.

Lachesis was one of the three Fates in classical mythology, and is often depicted spinning the thread of life. It is tempting to imagine that Rossetti had two reasons for choosing the name for his drawing, not only considering it appropriate to Jane's action of sewing but seeing it as a hidden allusion to her power to determine his destiny on both personal and artistic levels.

The drawing belonged to J.P. Heseltine, a trustee of the National Gallery for nearly forty years and one of the most respected connoisseurs of his day, as well as being a talented artist himself. As a collector he was omnivorous, his paintings and drawings taking three days to disperse by auction in 1935, but the present sketch is typical of his taste in that he undoubtedly had an eye for studies of attractive female models. The collection included many works of this kind, by Liotard, Highmore, Boucher, Fragonard, Boily, Ingres and others. Another Pre-Raphaelite example, Millais' painting The Farmer's Daughter, was sold in these Rooms on 14 March 1997, lot 57.
Posted by Hermes at 6:00 AM