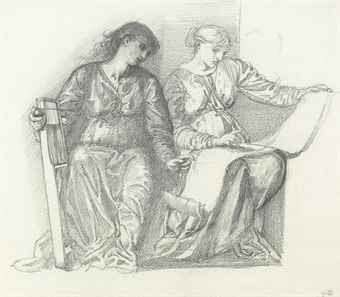 In the painting the composition is altered dramatically. The right-hand figure remains much the same but her companion is shown standing, and plays a fiddle rather than holding a psaltery.

The inscription has a certain poignancy. 'Owl' was Burne-Jones's affectionate nickname for the Anglo-Portuguese adventurer Charles Augustus Howell. In the mid-1860s they were on intimate terms and Howell acted as the artist's agent. Later, however, they became bitter enemies due to Howell's shady business methods and his meddling in Burne-Jones's affair with the Greek beauty Maria Zambaco.
Posted by Hermes at 6:00 AM