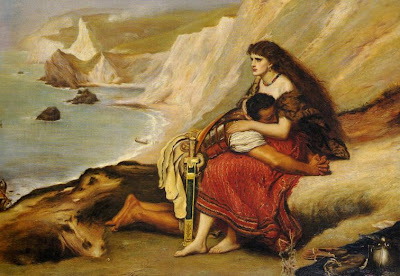 oil on panel
Made at Ernest Gambart's request on behalf of the collector F T Turner s a replica of the larger version commissioned by Bell and which Millais exhibited at the RA in 1865. He worked on this copy during the Summer of 1865 using the original which later went to Bell's house in Yorkshire. The scene comes from a descriptive passage by Frederick George Stephens in his account of the collection of Isaac Lowthian Bell at Rounton Grange near Northallerton, mentioning a Legionnaire and his Celtic mistress.
http://www.victorianweb.org/painting/millais/drawings/33.html
http://www.1st-art-gallery.com/Sir-John-Everett-Millais/The-Romans-Leaving-Britain.html
Posted by Hermes at 6:00 AM

I am trying to find the location of this painting.
Is that known, or is it in private hands?